Since I had four days off last week, I decided to take a mini-road trip with my son.  I set my sights upon Lincoln City.  Most of the Oregon Coast is brand new territory for me, having just recently moved from C A L I F O R N I A.  We set out to just make a day of it, but left too late, and by the time we arrived it was already getting dark.  My son is great in the car so far, he just sleeps and sleeps.  We parked at a parking lot with beach access and took a walk.

It was nice to see the ocean.  It was always there in CA, I lived in San Pedro right on the edge of the ports, I could see the ocean from my bathroom window in my shower if I craned my body the right way.  I worked off the bay (the L.A. river feeding into the Pacific) and I was constantly shooting up and down Ocean Blvd. in Long Beach which paralleled the ocean.  I practiced yoga on the bluff at sunset, and watched the sun dip into the ocean many nights a week.

Not wanting to drive home, I pulled out my phone and booked a room at Sailor Jacks.  I think we were supposed to stay there.  I had been undecided back at home, had pulled up some places and that was one of them.  Then, when we were driving around trying to find beach access, we ended up there at the end of a dead end street.  The place has lots of character, the check-in dude was very kind (he saw my son drop his toy under my car when we were coming in and ran outside to retrieve it), the price was amazing ($60-70 during this slow season), and T H E  V I E W!  I felt like we were I N the ocean. 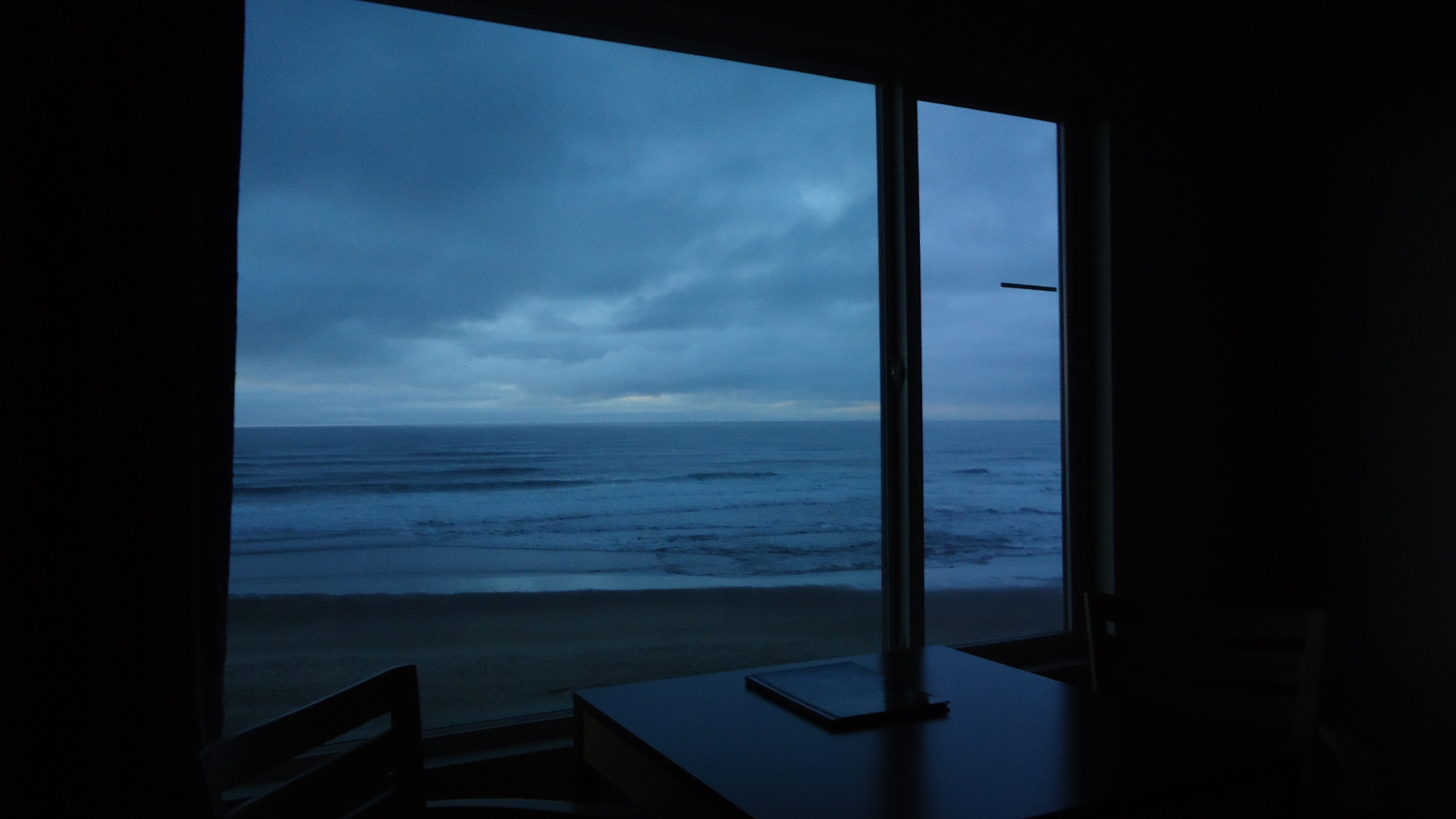 H had a hard time sleeping as he typically does when we travel.  I don’t even bother with a crib, he knows I’m there and he will be only happy in the bed with me.  He was basically attached to me the whole night.  Mama’s out there will know what I mean!  He woke at 7AM and was in his happy-go-lucky babbling/yelling stage.  I heard coughing through the wall so we hightailed it out of there so that our coughy neighbor could hopefully get some more sleep.  Up with the moon!  Man the early rising is so hard sometimes, but then I would never get to see so many beautiful beginnings. 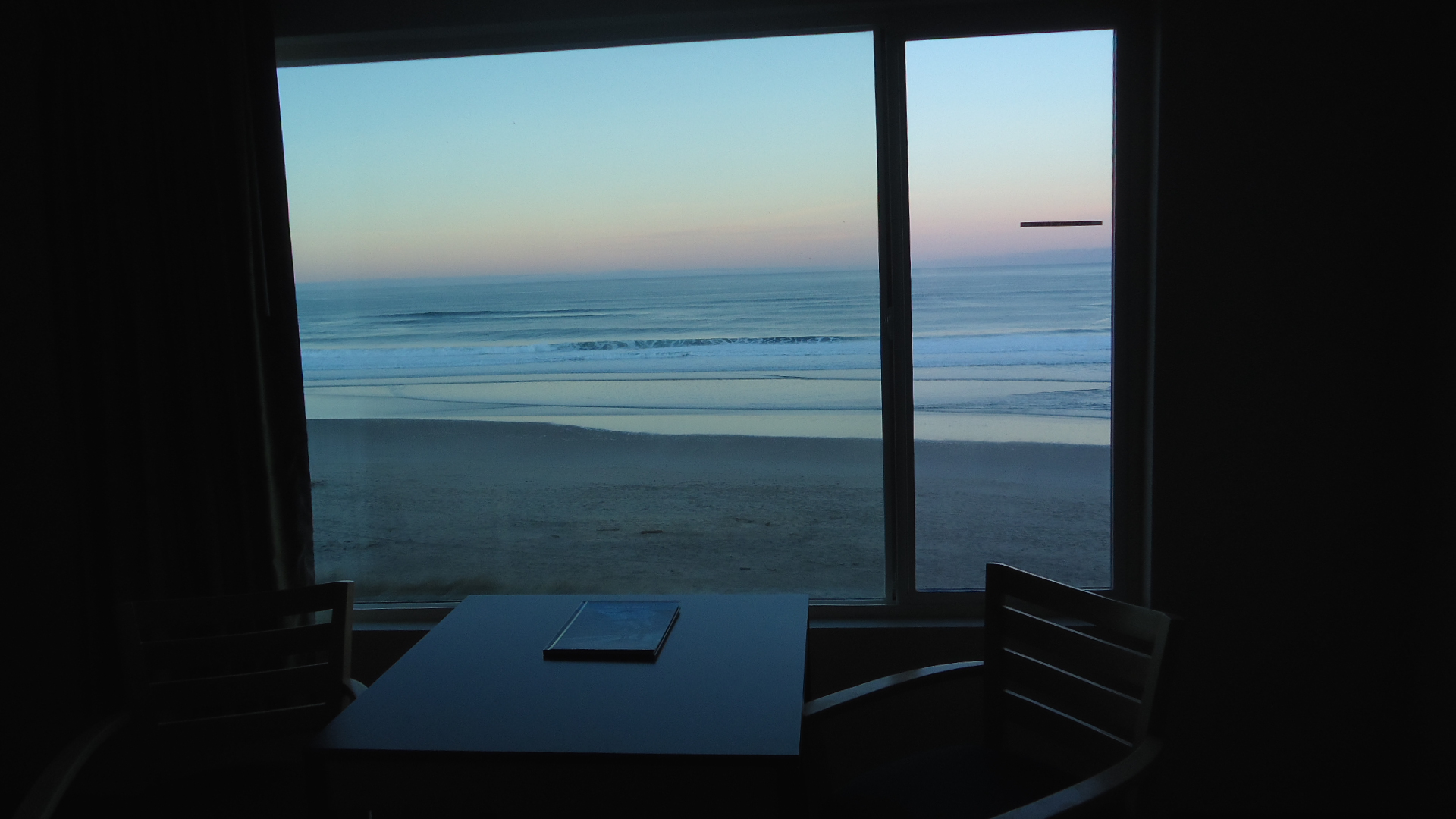 A Tsunami waved over the area in 1700.  It made me think a lot about how finite we are, we build up so much whether it be physical castles or castles in the air, and then smush!  It all gets knocked down.  Where do we go after this lifetime?  I think on it on a whole other level as a Mama.

We said bye to Lincoln City and tripped up the 101 to Tillamook.  H slept.  I wish I could have taken pictures because it was a beautiful drive.  There were giant misty fields with various livestock being statuesque, framed by blue mountains.  If I had $1 for every time I saw a barn…  And trees, trees, and more trees.  I’m still not used to all of the trees.  We did stop at one pull out so I could go to the bathroom.  The roads were empty, due to it being a Tuesday maybe.  I didn’t see hardly any cars at all.

In Tillamook we visited the Pioneer Museum.  I just kind of wanted a place to walk around while H was awake, otherwise he would be a crankster.  Tillamook is very pretty, I wished I could have stayed to explore the surrounding area.

After Tillamook we headed down Hwy 6, another windy and scenic drive.  I was starving by that point and many of the middle of nowhere diners were closed.  We ended up stopping in Banks, and I grabbed a grilled cheese from the Banks Diner, which turned out to be very good, best french fries I have ever had.

H’s grandparents W and M were very happy to see us (mostly H) when we got back.  We had a good trip and I felt so thankful for the beauty of Oregon and the time I was able to spend with my son.

I signed up for a $30 for 30 day pass at Escape to Yoga in Sherwood.  It’s a bit hard to find any studios out where we live, but had a friend who teaches there recommend this place.  It was my first yoga class in 2015, the teacher summed up my fears nicely as she opened the class, she said, “some of you coming back to yoga after a long break will be feeling nervous.”  Hell to the yeah I was feeling nervous, it didn’t matter how long I had practiced in the past, the time spent away during my pregnancy and raising little H was a LONG GAP.  I am so ready to get back into it.

And it was good.  Of course it was good, it’s yoga, yoga is the center of rich goodness.  As I moved through the poses, my mind breathed to me just one word: “Space.”  Space is what I have been lacking in all my going, going, going.  There has been no space.  No hands.  No down time.  Doing only four things at once.  God it felt so good, this first yoga class in the new year.  I was sore as I knew I would be.  I modified, and was proud that I allowed myself to, instead of trying to do each pose to the max and perfectly.  I went the next day as well.  I felt so strong the day after that.  I love how yoga makes you feel so strong.  I remembered huffing and puffing going up the stairs, 9 and 1/2 months pregnant as I seemed to jump up them in a single bound.

I’m excited for this month of yoga and what comes after.  The yoga teacher training I’ve been interested in has been moved back a month (April & May) which gives me an extra month to plot.  I keep praying that the doors open.  The strong voice inside of me keeps encouraging to trust and believe.

One thought on “HERE, THERE, AND EVERYWHERE”